I posted before that the borders of Europe are purely arbitrary. It occurred to me that it might be amusing to test this theory to destruction.

A continent is pretty easy to define – it is a large landmass entirely or almost entirely surrounded by ocean. By this definition, Europe and Asia are not separate continents but a single Eurasia. If we disallow any exceptions and remove the word “almost”, we find that Africa is not a separate continent either, and North and South America are also one. Most people would not go this far, and since it would end my blog post prematurely, I won’t either.

The definition above is thus full of subjective terminology: “large” and “almost entirely surrounded”. We should be careful to pin these down, and the best way to do so is to examine the edge cases. Australia is generally considered a continent but Greenland, the next largest landmass, is not. This is generally attributed to Greenland’s proximity to North America, making it an island thereof, but this cannot be sufficient to disqualify a continent. South America is closer to North America than Greenland is – you can’t get much closer than touching, after all. A better distinction would be that Australia has its own tectonic plate (as does South America), whereas Greenland shares one with the rest of North America.

So what about “almost entirely surrounded”? Considering the Americas and Africa, we see that their umbilical cords of land are narrow compared to their coastline. Determining the lengths of coastlines is mathematically tricky since they appear to get longer as you examine them more closely (this is a common property of fractals). Land areas are more stable quantities – we could therefore compare the square of the width of the narrowest point (roughly the area of the largest postage stamp that can be dragged from one continent to the next without getting its edges wet) with the total area of the continent. In the case of Africa, this ratio is roughly (200km)^2/(3*10^7km^2) = 1/750, which is certainly small. Let us be generous and define “almost entirely surrounded” as meaning that any land bridge has square width less than 1% of the area of the continent in question (in the case of Europe, this ratio is greater than 100%).

So our definition of a continent might now read:

A landmass that is surrounded by ocean, save for any land passage whose square width at the narrowest point is less than 1% of the total area, and which constitutes the greatest such landmass on a particular tectonic plate.

This works brilliantly for the Americas, Africa, Australia and Antarctica. It also, surprisingly, works for Eurasia as a whole, if we are willing to gloss over the fact that Eurasia spills over onto a few tectonic plates other than its own:

For an even more detailed view of tectonic plates, try this.

So what, I hear you say. You’ve taken two screenfuls of analysis to reach an obvious conclusion. Yes, I reply. But I can extend that analysis a little further. How do we treat those large parts of Eurasia that do not lie on the Eurasian plate? There is already a precedent – the Indian subcontinent, which is separated from the rest of Eurasia by mountain ranges and which corresponds almost exactly with the Indian tectonic plate. Despite a Wikipedia entry to the contrary, the term “subcontinent” has not been consistently applied to any other geographical area. I propose that it should.

Tectonic plate boundaries mostly lie underwater; ocean ridges generate new seafloor, which creeps across the globe and disappears back into the mantle at the bottom of trenches. Constructive dry-land boundaries, such as the one currently opening in the African Rift Valley, do not stay dry for long (in geolocical terms) as their floors sink and eventually the seawater pours in. Destructive dry-land boundaries on the other hand, are spectacular, giving us the great non-coastal mountain ranges of the world. This is exactly what happens at the land boundary of the Indian plate: not only has it created the Himalayas, but an entire chain of fold mountains from Baluchistan to Burma.

So perhaps we can define “subcontinent” by modifying our definition of “continent”:

A landmass that is divided from the rest of its continent by a plate-boundary mountain range, save for any land passage whose square width at the narrowest point is less than 1% of the total area, and which constitutes the greatest such landmass on a particular tectonic plate.

The above definition fits not only the Indian subcontinent but also an Arabian subcontinent corresponding closely to the Arabian plate, the mountains of south-eastern Turkey and western Iran quite effectively separating it from the rest of Eurasia. More interestingly, it would also fit a “Cherskian subcontinent” in far-eastern Russia, which roughly matches that part of Eurasia that lies on the North American plate, and is separated quite effectively from the lands to the west by either the Chersky or Verkhoyansk ranges (the Chersky range corresponds more closely to the plate boundary, but the Verkhoyansk range is more prominent). Since plate boundaries are not particularly useful on the surface (which exact fault do you draw the line along?), watersheds would seem more useful:

Note that the watersheds drawn by the image author are by no means exhaustive: at least one watershed can be drawn between any two points on the coast of a single landmass (possibly more if the landmass has endorrheic basins, as shown in grey above). You can clearly see the Indian and Arabian subcontinents picked out, despite the author’s less than ideal choices of endpoints (I would move in the eastern boundary of the Indian SC to somewhere on the west coast of Burma, and include the thin Levantine coastal strip in the Arabian SC). Not shown is the watershed defining the Cherskian subcontinent, but it can be seen below as the eastern bound of the Lena catchment: 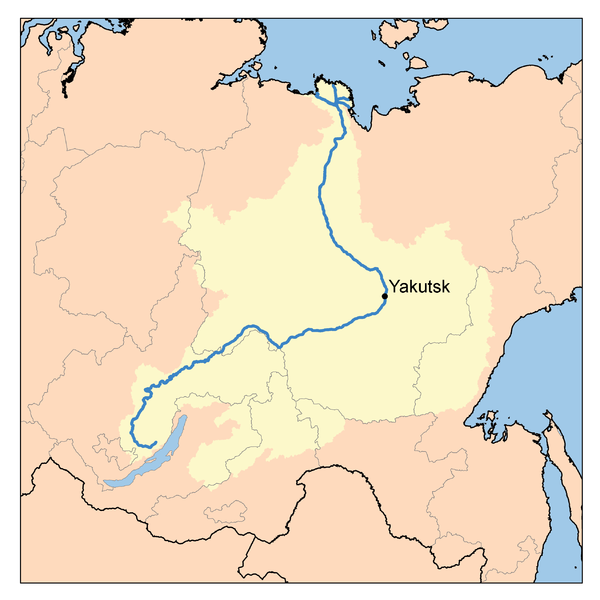 I’m quite taken with Cherskia – it’s the size of India but with the population of… well, I have no figures to hand but I can tell you it’s not much. Unfortunately it doesn’t hold water as a modern cultural region, unlike the Indian and Arabian SCs, but perhaps in the distant past when the Paleo-Asiatic cultures were more widespread in the area… who knows?

And still I haven’t found a boundary for Europe (told you it was hard). But we’re nearly there. Using watersheds as boundaries has a long pedigree, and the world map above has some pretty good ones despite its flaws. If we consider “core Eurasia” as the bit left over after removing the three subcontinents, it divides nicely by watershed into three further regions: “Atlantic Eurasia” west of the watershed between Hatay and either Nordkaap or the White Sea (pick one); “Pacific Eurasia” east of the watershed between the Sea of Okhotsk and the Burmese coast; and “Central Eurasia” between the two. Surprisingly, these correspond reasonably well to historical cultural areas, but also to emerging modern regions. “Pacific Eurasia” is the modern Asia-Pacific. “Central Eurasia” was the heartland of the Altaic peoples (Turks, Mongols etc.), then mostly came under Russian and Soviet influence. “Atlantic Eurasia” corresponds more closely with the likely extent of the E.U. in 2025 than does the standard geographical definition of Europe.

There are still flaws. The definition of “Atlantic Eurasia” is not as clear as its Pacific counterpart – due in no small part to its lack of good mountains. The watersheds that run through European Russia are unremarkable on the ground. But perhaps we see some of the attraction of Central Asia for Russians – throw a bottle in the river in Moscow and it will wash up on the shores of the Caspian, not of America. Meanwhile, the snowmelt in Kiev flows into the Med.

Update – It suddenly occurs to me that the presence or absence of ice-free ports might be a practical way to define the northernmost tip of the Atlantic/Central Eurasian watershed. This of course is subject to global warming, so may not be sufficiently permanent…

View all posts by andrewgdotcom

3 thoughts on “More on continents”